Amid the khaki, rust, olive, jade of the tree canopy, there’s a spark of orange that catches the eye. 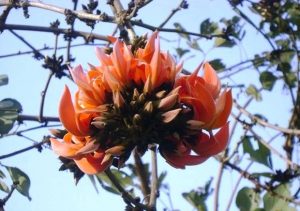 It immediately lifts one spirit, a burst of energy that can only be seen in the wild. The Flame of the Forest is in bloom and you know summer is just around the corner.

Cast your eye along the tree tops as far as you can see, and the vivid blossom infuses your line of vision at random junctures. A flock of plum-headed parakeets rise up from the branches of a nearby tree, screeching in chaotic chorus. 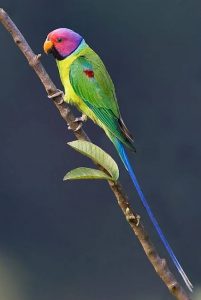 They’re simply exuberant, delighted to be alive – and they want you to know it, before they fly off to a neighbouring perch.

As the sun filters through the branches of towering Sal, the leaves shiver as a barrel of monkeys swing through, little ones clutching on to mummy’s tummy, while the alpha Male chivvies the chattering bunch along.

An errant young male topples precariously, slightly tipsy on the potent nectar of the Mahua tree. Alpha male whacks him across the head and he hustles along with the rest.

As you slide your eye down the bark of the tree, two gleaming yellowish eyes look straight into yours. It’s an owl, settling down after it’s night hunt. Feathers puffed around it like a blanket, you can barely make out it’s camouflage against the bark of the tree. Only it’s beady eyes and a soft hoot tell you that it’s there – watching you.

Dense bamboo thickets create a screen of jade and gold flecked by the rays of a rising sun. And at the very top of its cane where the long leaves reach up to the sky, a turquoise gleam blinds you. It’s a kingfisher, waiting for the right moment to dive into the stream that trickles through the bamboo shoots – under the watchful eye of a Fish Eagle – utterly still – who is waiting to do the same from it’s perch on a tree stump on the other side.

As you adjust your eyes to the dapple effect, a herd of spotted deer come into view, calmly chewing on the leaves and grass that grow on the forest floor. A few look up in benign amusement to observe the humans watching them eat, before they go back to nourishing themselves. A little behind the rest, a mother and baby are curled up against each other on the ground.

Suddenly the forest stills. Even the wind drops. The whoop of a Barking Deer cuts through the tension. It’s an alarm call. A predator is near. The warning cry of a peacock echoes through the bamboo grove. Suddenly the forest comes to life. Jungle fowl are running in all directions. The monkeys are rousting around in the treetops. Babblers and parakeets twitter madly. A wild boar charges out of the bush and darts across the way. The spotted deer freeze, then pick up their hooves and start to run, a flash of fawn and white before they disappear into the undergrowth. Within seconds we’ve been deserted. Or have we? 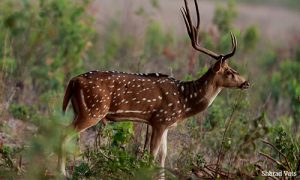 A low “oomph” sounds from a clump of grass. There’s a tiger close by. We’re not alone. But we can’t see it. It’s not a roar. It’s simply a warning. We’ve been spotted.

They say a tiger never reveals itself until it wants to be seen. Our tiger wasn’t in the mood for introductions. It sat in the shade of the tall grass, barely moving. Only a gently undulating shadow revealed itself as a breathing stripe. If you traced the stripe to it’s spine, and then over it’s shoulder, you could just about make out an ear…cocked, so that it could hear our every move.

There’s a slight crackle in a dry stream-bed nearby as a snake rustles through the leaf litter. We jump! The tiger twitches and suddenly the breathing stripe starts to rise out of the grass and reveal itself. He’s male – and he’s coming to investigate this unusual species in his terrain. We aren’t running anywhere and he knows it. So he takes his time. He does a little stretch, a yawn and a snap of his jaw as a fly buzzes around his head. Then he emerges out of the grass, a gigantic beast, one paw carefully padding after the other. His head seems almost out of proportion with the rest of his lithe body. But nobody seems to think that this tiger is a fathead. 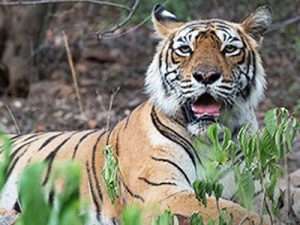 Mesmerised by his sinewy stalk, it’s only as an afterthought that you observe the small white bird perched on his back, calmly picking off the ticks from his fur. Another alarm call rends the air, this time from a langur high in the trees. He stills. Is it worth leaving off these humans and veering away in a different direction?

Curiosity prevails. He continues to walk towards us with a purposeful stride. As he gets closer, the stripes in the binoculars loom larger, until they blur. Because he’s that close. We put down the field glasses, with slightly trembling fingers. He comes up to the road, and looks at the jeep with interest. Then he pads around it, pausing to sniff it’s tracks. Another “oomph”. Nobody breathes. And then just as silently, he walks away. Pausing for a moment to turn his bed and give us a little wave of his tail, before it simply disappears. 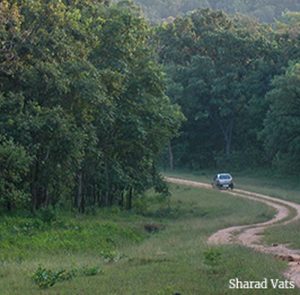 Somebody lets out a long breath. The driver lets in the clutch. It’s time for us to disappear as well.