The river Pench runs across rocky outcrops and tall reeds, dividing the Pench National Park into two zones – one to the east and one to the west. Situated at the confluence of four different hill ranges – the Aravalis, Vindhyas, Satpura and Maikal – it is one of the most scenic forests in Central India.

Pench is a dry, deciduous forest that is largely dominated by teak, vast areas of grassland and gently undulating meadows. It is one of the last teak forests left in India, as teak is much sought after for its valuable timber. It’s also a difficult tree to replant, and therefore Pench is extremely important from both an ecological and commercial perspective. Teak tends to shed its leaves by mid-February which gives the forest a dry and barren appearance, but as a result, the wildlife sightings are excellent, because the animals can be spotted at quite a distance.

This park is prime feline territory with a healthy tiger and leopard population. It’s also home to several avian species and the bird life is one of its greatest highlights. It is home to over three hundred species of birds, both migratory and resident. From peacocks to kingfishers, plum-headed parakeets to golden orioles, Pench is a bird-lover’s playground. 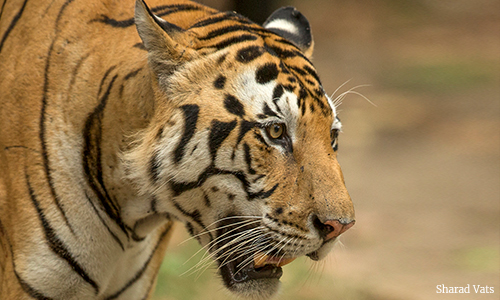 Pench is situated on the border of Madhya Pradesh and Maharashtra bordered by the Satpura hills. One can enter the park from the gates in either of the two states.

Note: The park is closed to tourists on Wednesday afternoons as well as all day for the Diwali and Holi holidays.

Pench is full of starkly beautiful large trees that have a ghostly white colour. This is the Kulu tree, also known as the Ghost Tree. They soar high towards the sky, and have a knobby-kneed look, that makes each one seem like a sculpture. Indigenous to this part of Madhya Pradesh, the Kulu tree is revered by the local tribes for its medicinal properties.

Pench has recently seen a very successful resurgence of tigers and is part of the Project Tiger conservation project.

The Gaur is a bovine of the same species as the American bison and the African Cape Buffalo. However, it is much larger than either of these trans-continental cousins.

Pench is home to several carnivores and birds of prey. The park’s tigers coexist with a healthy leopard population as well as smaller jungle cats. Sloth bears also make their home in Pench’s treetops, though one needs to keep a sharp eye out for these stealthy creatures, as they remain well hidden. The Dhole (Indian Wild Dog) is another predator that is native to this area, along with Jackals, Foxes, Civet Cats and Hyenas. Pench is also home to several raptors such as the Crested Serpent Eagle, the delicate and golden-eyed Collared Scops Owl, and the Brown Fish Owl.

Pench has several thousand Cheetal deer. These prolific Bambi like creatures are a sight to watch as they dance across your line of sight. To catch a mother with its fawn is one of the most endearing sights in the entire animal kingdom. At the other end of the spectrum, the Gaur, or the Indian Bison is a hefty beast but its footfall is so soft that you’ll never know it’s there. Pench’s rolling meadows are perfect for Sambhar and Nilgai (the Blue Bull or Indian antelope) to graze on – and in turn, a plentiful supply of prey keeps Pench’s food chain well supplied.

Pench is a birders dream. Cock your ear as the Racket-tailed Drongo bursts into a rapid beat, woodpeckers tap away on tree-trunks, and the shrill cry of a Shikra carries on the wind. Golden orioles, Egrets, Parakeets and Paradise Flycatchers are just some of the birds that one can always find in Pench.

You can drive in to Pench from Nagpur and it usually takes around two hours by road (Note: if you are going to the Jamtara entrance of the park, it can take you up to 3-4 hours from Nagpur). Pench is also within easy driving distance of Tadoba Tiger Reserve (approx. 5 hours) and Kanha National Park (approx. 6 hours).

Buffer-zone safaris – Take a gorgeous walk or game drive through the buffer zone with a naturalist and experience its natural beauty. Once in a while you will sight the pug marks of a Tiger, sloth bear or even wild dogs.

Night Safari – To experience the forest in pitch darkness with gleaming eyes, soft rustles in the undergrowth, and occasionally a Tiger walking on the track is a once in a lifetime experience. 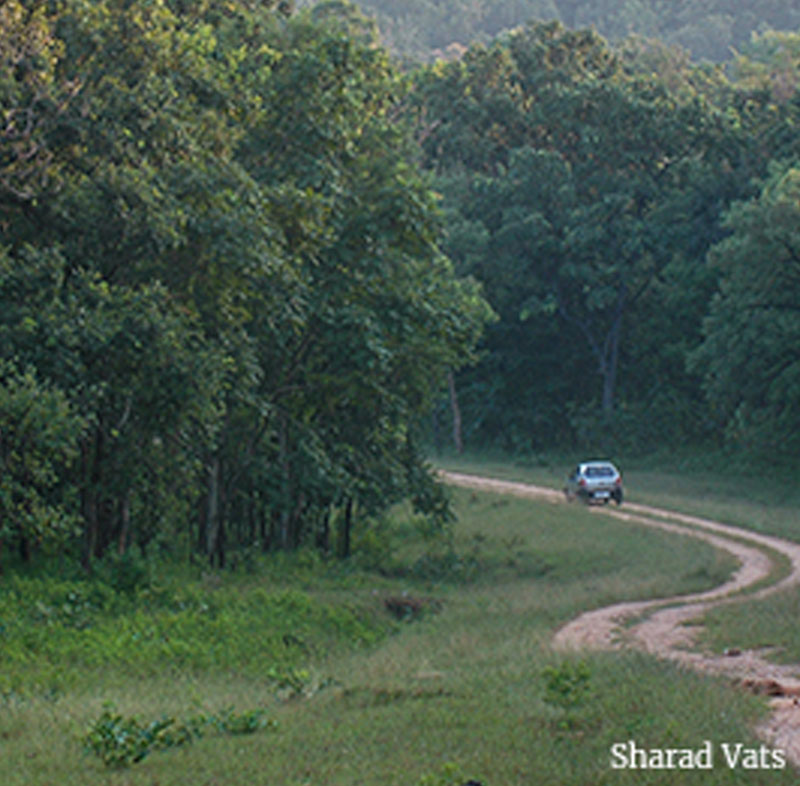 Pench is easily accessible for most of the year.

A Taj Safaris Lodge. What we love… Each of the twelve villas at Baghvan features it’s own private tree-top machaan (hide-out) where you can unwind after your game drive or even sleep under the stars at night.

What we love… the home-cooked cuisine at Jamtara is delicious. Wholesome, healthy and locally-sourced, come back from your game drives to an exquisite meal that is artfully laid out in a natural setting.

What we love…just six tree-house units offer an unrivaled sense of space and privacy.

What we love… the Ayurvedic spa emphazises wellness amid nature.

What we love… the Vanraj Villa is ideal for families. 4000 square feet of space offer two spacious bedrooms and a large living area, as well as the services of a private butler.

What we love…the warmth of the staff and the rustic charm of the property exude a sense of cozy hospitality.

Pench’s biggest plus point is that it lies at one end of the migration corridor with Kanha. It provides a robust habitat for the tiger and other wildlife, allowing them to move from one region to another, diversifying the gene pool. You can also do safaris within the corridor between the two parks.

Currently there are four ranges where tourists are permitted. These are Turia, Karmajhiri, Jamtara and Khursapar. While the majority of Pench’s safari lodges are located next to the entrance for Turia, Jamtara and Karmajhiri, which are a bit further off, give you a far more serene experience within the park. The Khursapar range is open throughout the year and the entrance for this region of the park is situated just a few kilometers away from Turia.

A less known fact is that Pench is also home to a wolf sanctuary, where one can spot the Indian Grey Wolf in the wild. This sanctuary allows you to go on night safaris, which can be a thrilling experience.

The region surrounding the Totladoh dam is a particular favourite with migratory birds. During the height of the monsoon, the floodwaters from this dam overflow into the park and submerge some parts of it. Areas within the park, such as Sitaghat, are only accessible after the floodwaters recede around end November.

The region known as Alikatta, where a village – now relocated as part of a wildlife conservation effort – once stood, is extremely scenic, particularly in the evenings as the Cheetal (Spotted Deer) gather around here.