Bandhavgarh lies in the heart of Central India, in the north east of Madhya Pradesh. It is a lush jungle, full of waterfalls and rivulets that cascade across the forest floor. Thick bamboo groves are interspersed by groves of Sal and Mahua trees whose scent mingles with the jungle’s earthy fragrance.

Sprawling Banyan & Peepul trees are interspersed by the stark branches of the Flame of the Forest – a sight to behold in the summer, when their leaves fall off & their deep orange flowers are in bloom. Bandhavgarh is a blend of many different types of vegetation including tropical moist and tropical dry deciduous forest. As a result, it has become a breeding ground for over 600 species of flowering plants. The biodiversity here is incredible, with over 35 species of mammals, over 250 species of birds, over 75 species of butterflies, and of course, the ultimate predator – the tiger. 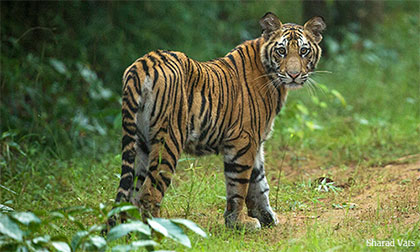 Bandhavgarh National Park is spread across the Vindhya range, near the North Eastern Border of Madhya Pradesh,in Central India.

In Season: The park is open from 1st Oct to 30th June each year. It closes during the monsoon season from 1st July until 30th Sep.

Bandhavgarh was once the hunting grounds of the Maharajas of Rewa and the first white tiger was found here in 1951!

Today, Bandhavgarh has one of the highest population densities of the tiger in the world. It is a key reserve for the Project Tiger wildlife conservation initiative and is one of the best places to visit to view this magnificent creature in its natural habitat.

Bandhavgarh offers some of the best chances to spot the tiger and consider yourself unlucky if you only see one! It’s also home to quite a few leopards, as well as several smaller felines such as civet cats and jungle cats. The Dhole (Indian Wild Dog), Bengal Fox, Mongooses, Hyenas and Jackals are the other predators that roam the forest. Bandhavgarh is raptor haven Many species of eagle, vulture, falcon, owl and hawk hold their own in the tiger’s lair.

The Spotted Deer or Cheetal is one of the most prolific herbivores in India’s forest. Shy & graceful, they graze upon the forest floor– unsuspecting prey for big cats. Their cousin, the Sambhar is a saltier character. Larger, darker and more robust, with a powerful sense of smell, they are one of the first to raise the alarm that danger is near. The Chausingha (a breed of antelope) and Chinkara (a breed of gazelle)are found here. Bandhavgarh is rampant with wild boar, squirrels, bandicoots, and primates. The black-faced Langur monkeyskeep a sharp look out. They serve as the eyes of the forest. Their loud whoops carry for miles over the foliage as they swing from one treetop to the next.

In Bandhavgarh, the birdsong is like a symphony out of control. The parks cascading waterfalls, streams, rivulets and reservoirs are home to some of the finest bird life in the subcontinent – many of which are endemic to these parts. From Sapphire Flycatchers to Golden Orioles, the Indian Hornbill to the Hoopoe, it’s a kaleidoscope of vivid hue and cry. Peacocks, Teals, Jungle Fowls and Parakeets are found here in large numbers.

Nearest railway stations are at:

Nearest airports are at:

Buffer zone Safaris – While the regular game drives & elephant back safari rides take you into the core zones during the park season, buffer zone game drives can be done even in the off- season or when the park is closed.

Nature trails with a naturalist – Bandhavgarhis a nature-lover’s delight. Take a walk through the buffer zone of the forest with a local naturalist to learn more about its flora and fauna. 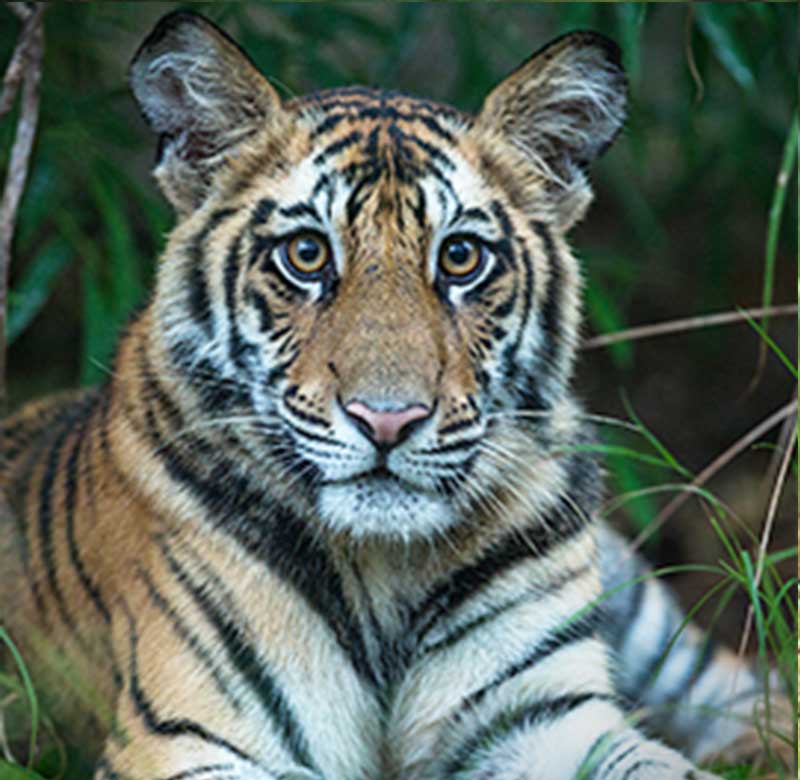 Bandhavgarh is beautiful throughout the season and it’s never a bad time to visit the park (although April, May and June are very warm).However, depending on your interest we advise certain times of year:

From mid-December to mid-February, Bandhavgarh can be very chilly. The early morning game drives in particular can be very cold, thanks to low temperatures, moisture in the air and a strong wind chill factor in an open jeep. Temperatures often dip to zero degrees Celsius (i.e. in the early 20s in Fahrenheit). We recommend that you bring multiple layers, with long sleeves, a warm jacket, hat, scarf and gloves.

As the weather warms up, it can become extremely hot. Peak summer months can experience temperatures as high as 46 degrees centigrade (over 100 degrees Fahrenheit). We recommend carrying clothing that is cooling and protects you from the sun. In June, we recommend that you carry light protection for yourself & your photography or film equipment from possible early rain showers & thunderstorms. The rains do cool the temperature down considerably & can bring temperatures down by 10-15 degrees after a single shower.

There are several excellent accommodations and jungle lodges in the tiger’s lair and we have no doubt that you will love your jungle hideaway during your stay. We have picked out some of our favourites based on the quality of accommodation, service and value:

What we love: the sense of space. Just 12 ethnically designed units on 48 acres of land.

What we love: the tribal touch. Gorgeous interiors embellished with local tribal art.

What we love: being up on the treetops gives us birds eye views!

What we love: the eco- friendliness of its operations and the in-house spa.

What we love: the warm hospitality and staff that goes above and beyond.

What we love: their signature aromatherapy turn-down service.

What we love: the sense of heritage and sustainability.

What we love: farm-fresh home-cooked meals!

What we love: sweeping views of Bandhavgarh Fort from the dining room.

Tourists are allowed to visit three ranges in Bandhavgarh, called Tala, Magdhi and Khitauli. The number of permits issued for each zone is highly limited, and need to be booked 120 days prior to the date of your game drive. In order to ensure that we can optimize your time best, we recommend that you book your tour at least five months or more in advance of your travel date. This allows us to secure permits for you to enter the best possible zones for viewing Tigers. Sightings are never guaranteed, but we do get frequent inputs from our experienced drivers & naturalists on which zones are experiencing more tiger views at a given point in time.

Even though the core zones are closed on Wednesday afternoons and during the Holi and Diwali festival days, the buffer zones are available for safaris throughout the year. Big cats are often present in the buffer zones, but they are not tracked regularly. We always recommend that you include at least 3-4 nights in Bandhavgarh, & do at least one game drive in the buffer zone, as very few tourist visit the buffer areas and it offers total exclusivity from the rest of the crowd.

For more Tigris Tips, check out the Tigris Blog.

Bandhavgarh is a must for anyone who wants to catch sight of a tiger. In most parks, catching sight of a tiger is a matter of luck. In Bandhavgarh, you’ll be unlucky if you only see one! Since it’s less accessible than other parks such as Ranthambore or Tadoba, it retains a sense of exclusivity as well. It’s also a great spot for amateur photographers to get the tiger in their sights.