Very few ecosystems in the world can rival the sheer beauty of Corbett National Park. An expansive swathe of land that is nestled into the foothills of the Himalayas, Corbett is simply stunning. With the mountains as its backdrop and the swift flowing tributaries of the Ram Ganga river flowing through it, Corbett’s landscape and legend lends itself to the wildlife lover’s imagination.

Thick copses of Sal form the heart of a moist deciduous forest of Peepul, Mango, Haldu and Rohini trees. Corbett is sandwiched between the Lesser Himalayas at one end and the Shivalik range at the other end. It encompasses a vast terrain of hills, marsh, grassland, riverbeds and a lake and forms a part of the Himalayan sub-tropical eco-zone. It is the oldest national park in India, and is named after Jim Corbett, who was ironically a big game hunter turned ardent conservationist, who spent several years in the area and came to call it his own. Corbett’s biodiversity is immense. This park is that natural habitat to herds of elephant, tigers, the Asiatic Black Bear, Leopards, and several other species of birds and animals.

While many national parks claim to have the high Tiger density, it is actually Corbett which has the highest Tiger density in the country. Along with Kanha and Nandhaur it is considered one of the safest havens for the tiger. Conservationists estimated that if tigers lose their stronghold and their numbers start to dwindle, Corbett would be among the last parks to lose them all.

Corbett has close to 550 species of birds, and is one of the few parks that offers accommodation inside the national park. The forest rest houses, some of which are over a hundred years old, are located in the heart of the forest. These rest houses were made by the Britishers during the Raj era. Staying in these rest houses is a sheer delight. Dhikala, Sarpadulli, Khinnanauli, Gairal, Sultan, Malani, Rathuadhab, Halduparao, Kanda are some of the FRH’s inside the forest. 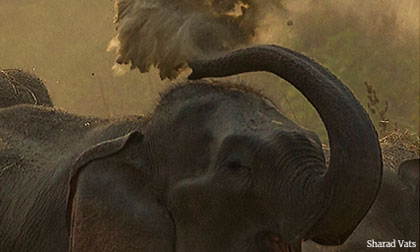 Corbett is situated in the newly founded state of Uttaranchal, at the foothills of the Himalayas.

Topography: Corbett is a vast moist deciduous forest, which makes up a large portion of the Himalayan sub-tropical eco-zone. It is one of the thirteen designated parks that make up the Terai Arc Landscape and it’s vast terrain includes hilly areas, marshes, grassland, dense forest, and several riverbeds. The Ram Ganga and the Mandal rivers flow through the park, and several rivulets, streams and waterfalls branch out into the forest.

In Season:The park is open…

Corbett is home to an unusual predator – the endemic fish eating crocodile, Gharials are also seen in the Ramganga river from the Crocodile point.

Corbett was the first national park to be set up in India. It was also the first park to launch the Project Tiger wildlife conservation program and is one of the thirteen parks that make up the World Wildlife Fund for Nature’s Terai Arc Landscape program. Corbett is critical for the survival of three of the Indian subcontinent’s big game species, which includes the tiger, the Asiatic Black Bear and the Asian Elephant.

Corbett is home to several species of animals, both large and small. The primary predator here in the tiger. Corbett has a healthy tiger population, and it’s vast area and deep core, gives the animals ample room to move around. The other large predator – which many fear more than the tiger – is the Asiatic Black Bear. This shaggy looking creature can charge an enormous speed and its claws can rip many large animals to shreds. Leopards are often found in Corbett, particularly among the upper reaches of the park, in the hills. Several smaller cats, mongooses and other smaller predators can be spotted amid the foliage. The water bodies in the park are home to both the Gharial and the Mugger – and a particular fish eating variety that is endemic to these parts. Yellow Throated Marten is also seen in some areas in this park .

There are many herbivores in Corbett and chief among these is the Asian Elephant, a critical species in the entire ecosystem. Corbett is one of the best places in the Indian Subcontinent to see elephants in the wild. Several species of deer, otters and the extremely rare Himalayan Pangolin inhabit this terrain. Corbett has its fair share of reptiles and its star species include the King Cobra and large breeds of Pythons that are capable of eating prey as large as a deer.

Corbett is a natural roost for several species of birds both resident and migrant. There are plenty of predatory birds including the Crested Serpent Eagle, the Lesser Fishing Eagle and the Fish Owl – both the Brown Fish Owl and the rarer Tawny Fish Owl. Several resident species such as magpies, ultramarine flycatchers, blossom-headed parakeets, and the red jungle fowl are commonly seen among the treetops. Several migratory species come here in the winter months and you can often find herons, ducks and egrets in large flocks. One of the rarer inhabitants of the bird family that is found in Corbett is the Great Indian Hornbill. It is the largest among the eight species of hornbill that are found in the Indian Subcontinent and is a majestic bird – especially when it is in flight.

The nearest railway stations are at

Game drives by jeep –you can opt to book your own jeep or share with other passengers.

Note for Sharad: What about the following activities? 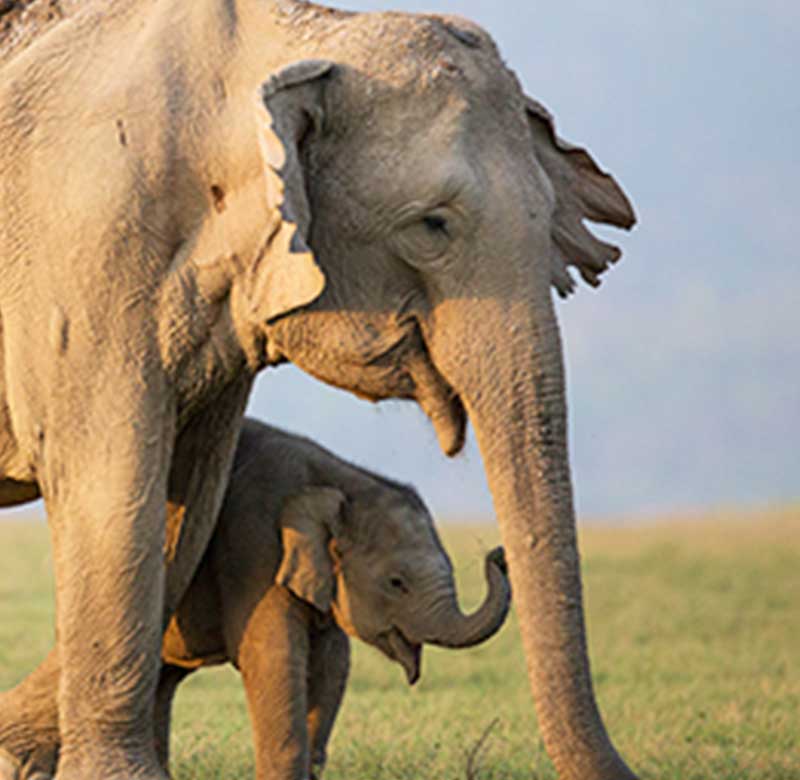 It’s always a good time to visit Corbett. If you are specifically interested in birds then December, January and February are good times to visit. One can view wildlife in the park throughout the season. February onwards is a great time to see wildlife as they come out of the foliage in search of water.

The weather in Corbett is temperate. Winters are very chilly, especially the early mornings and late evenings, when a heavy fog and abundant dew cover the greenery.Entry from Durga Devi gate in the winter months where the sun does not hit the ground in many areas is an experience that you will remember for a long time!

One definitely needs a warm jacket, even as late as March. The summers here are warm, and can go up to around 40-45 degrees centigrade (approximately 115 degrees Fahrenheit).But even in Summers the morning and evenings are very pleasant.

What we love… this is one of the most charming safari lodges in the entire Indian subcontinent. The rooms are cozy, airy and full of natural light. The food is home-grown and home-cooked into delightfully earthy meals and the service is warm and unobtrusive. Excellent naturalists and facilities including a pool, bicycles, a well stocked library and a spa make it idyllic.

What we love… the tranquil location on the banks of the Kosi river creates gorgeous views and a serene ambience.

What we love…Each spacious cottage has its own kitchenette and stunning views over the hills.

What we love…Staying at Dhikala Forest Lodge is an adventure! Situated in the heart of the forest, one is completely immersed in the jungle during their stay over here!

The popular tourism zones are; Dhikala, Bijrani, and Jhirna. Apart from these one can also do safaris in Sitabani forest, Sonnadi Sanctuary. Entry is also available from Durga Devi gate. To experience a safari in Dhikala zone one must have a permit to stay inside the park. These permits for foreigners are available 90 days prior to travel date. Without the stay permit in Dhikala one can only do a canter safari in this most happening zone.

Bijrani opens from 1st October till 15th June, while Jhirna zone is open round the year. We never advise safaris in the monsoon time in a forest with wild Elephants.