In a secluded corner of the western subcontinent lies a dry savannah called Sasan Gir. Earthy greens and browns of teak and acacia are interspersed by scrub and grassland, among which fiery red Flame of the Forest bursts into bloom in the summer. Imagine a canvas of muted colours with bold slashes of vivid colour.

The stillness in this quiet neck of the woods is only broken by fauna rustling in the undergrowth. A viper gives a sudden hiss, a hyena howls, and the alarm call of the Cheetal pierces through the darkness as a lioness pads softly through the leaves with her cubs in search of a waterhole.

Gir is a hot bed of biodiversity. Reptiles, amphibians, big cats, birds, bovines and herbivores make up a thriving eco-system of jaw-dropping variety, including two of the rarest creatures on the planet – The Asiatic Lion. 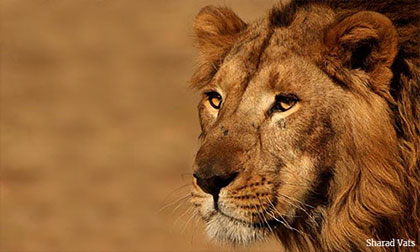 Sasan Gir is in the western reaches of Gujarat, in Junagarh district.

Topography: A forest of scrub and savannah that stretches for approx. 260 square kilometers.

In Season: The park is open from 16 October until 15 June each year. It closes during the monsoon season from 16 June until 15 October.

Gir also has a healthy leopard population – despite being a lion reserve. Leopard sightings are frequent and these felines coexist with the lions peacefully.

Sasan Gir is the only place in the world today where the Asiatic Lion can be found. Unlike its African cousin, this species was in rapid decline and down to a mere twenty creatures, before local conservationists and the government stepped in. Today it’s one of the most protected species in India and numbers over 500 animals in existence. The Lion Breeding Program has been instrumental in increasing the numbers of these big cats in their natural habitat.

African and Asian lions have been isolated from one another for over 200,000 years! Asiatic lions have less facial hair than their African cousin – their mane is much smaller. They are more compact in size. Their coat tends to be thicker, while their tasseled tails are longer. They’re also fatter – thanks to a fold of skin around their stomachs that is not present in African lions.

Mind your territory. Sprawled beneath the shade of a tree, a lone Lion keeps a lazy eye out for invaders in his habitat. He lolls around, disinterested in any prey that may inhabit the undergrowth – after all, its feast or famine for these creatures who can eat up to 75 kilos of meat at a time.

Grazing deer keep a wary eye out for Gir’s other cats – smaller but more lethal, especially the Leopard.

Gir’s food chain is a natural wonder… Cats share territory with badgers; mongooses, jackals and hyenas inhabit the same space with cobras and pythons, the stealthy Mugger crocodiles and scaly monitor lizards slither across each others path in wary acknowledgment of each other’s existence.

Gir is a study in herbivore diversity. Cheetal deer and Sambhar graze peacefully on the grass, while keeping a wary eye out for a charging wild boar. But these trees and savannah grasses hide rarer species including the endangered black buck and the Indian Antelope, the Blue Bull, who are constantly on the alert for a the hidden spines of a sleeping porcupine or the snapping jaws of a crocodile. If your luck holds out, you may catch sight of another extremely rare and beautiful creature in Gir – the Pangolin, one of Asia’s most endangered species.

If you look up into clear skies, don’t be surprised to find yourself eye to eye with a hovering vulture. Gir is particularly known for its birds of prey – including six species of vulture, which feed on the plentiful carrion of the jungle’s predators.

Perched up on the tree tops, you’ll often find a Crested Serpent Eagle keeping a firm eye out for something juicy to swoop down on and sweep away. But you might have to look further for its rarer cousin, the endangered Bonelli Eagle. Gir is one of the only natural habitats left for this majestic bird.

Look among the trees and the wetlands for sparks of colour. Chances are you’ll see brilliant flashes of plumage as a bird takes flight. Gir has one of the highest concentrations of bird life in all of India! Some of our most most beautiful birds such as the Paradise Flycatcher and the Painted Stork are native to this forest.

You can drive in to Sasan Gir from Ahmedabad, which is an international airport as well. It takes approximately 7 hours to get from Gir to Ahmedabad by road.

Bird walks with an avian expert. 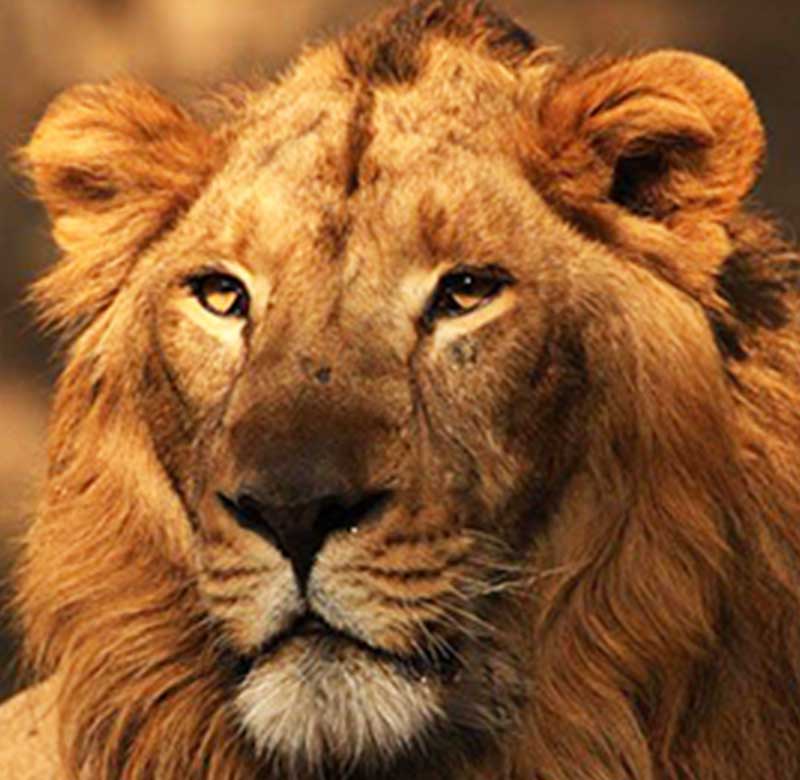 Sasan Gir gets extremely hot and dry in the summer. However, this is also when the animals come out in search of waterholes and the best sightings occur.

Big Cats – The dry months i.e. January through June are the best months, though several sightings take place even otherwise.

What we love… clean lines, a professional and friendly staff, and spacious rooms make this the top choice in Gir.

What we love… the thatch and bamboo embellishments give this charming and simple lodge an earthy feel.

What we love…ethnic Gujarati accommodations that are situated in a gigantic mango orchard make this a haven for birds. Clean and simple accommodations with friendly staff and service make it excellent value for money.

Permits to access the park are limited for tourists, and need to be booked at least 90 days prior to arrival. They also run out quickly as Gir National Park is the only park for the Asiatic Lion in India. Therefore we advise you to plan your trip well in advance so that the we can secure your entry to the park comfortably. Please note that we cannot book your game drives until you have confirmed your trip with a deposit. Please also note that we will require complete passport details of all travelers in order to obtain your permits. The passport should be valid and should be carried along with you when you travel for verification purposes.

Gir National Park is a must for anyone who wants to catch sight of Asiatic Lions, Leopards, Deer such Sambar & Chital, Antelopes such as Blue Bull, Four-horned antelope, Indian gazelle and Wild Boar are in abundance in Gir. Jackal, Striped Hyena, Jungle and Rusty-spotted cat, Langur, Porcupine, Black-naped Hare are among the other mammals of Gir. In most parks, catching sight of these mammals is a matter of luck. . It’s also a great spot for amateur photographers as well.