In the heart of Central India, amid the gentle rise of the Satpura Hill range, lies Satpura National Park. It’s a highland habitat that is completely unique in Central India. Its dense and rugged landscape consists of sandstone slopes, rivulets that flow down steep gorges, narrow ravines, and sharp peaks. It has a rich and varied range of biodiversity that makes it a fascinating ecosystem.

The Denwa backwaters create the Tawa oxbow lake, which gives the park an ethereal beauty. Several secluded coves lie in the curves of its banks (as do basking Mugger crocodiles) that are ideally explored by canoe or boat. It is the perfect habitat for felines such as leopards, a few tigers, as well as bears, particularly the elusive sloth bear.

The forest is an eclectic mix of sal, teak and tendu interspersed by groves of bamboo, bel trees, and several different kinds of grass and medicinal herbs and plants. Several smaller animals and many species of birds are found in Satpura, which makes it one of the best-kept secrets in the Indian wilderness. 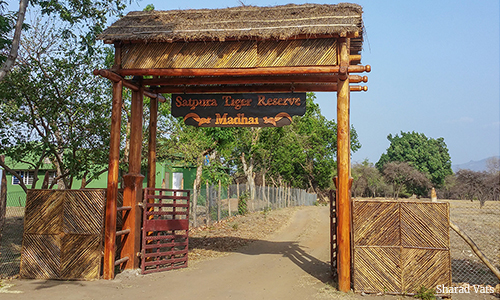 Topography: The park has an extremely rugged terrain with tall peaks, sandstone hills, deep ravines and gorges, and a beautiful water body in the heart of the park. Waterfalls and rivulets trickle through thick foliage of Sal and Teak. The Denwa River has been dammed here, and it is these backwaters that create the Tawa Lake.

The highest peak in Satpura’s mountainous terrain is called Dhoopgarh (Sun Fort) because it is the first point in Madhya Pradesh from where you can see the sun rise.

Satpura has a large leopard population as well as a few tigers. However, they are a little more elusive thanks to the park’s hilly terrain and dense foliage. The park is also home to bears, and is one of the best places in India to spot the sloth bear. The Dhole (Indian Wild Dog) is also found in packs in different parts of the park.

The inlets of the Tawa Lake are the natural habitat of several Mugger crocodiles, who lie well camouflaged amid the rocks and mud. Hyenas, Jackals and jungle cats are also quite common. Birds of prey, particularly eagles, buzzards, osprey, kites and hawks, are often found soaring in the skies above the steep ravines and gorges of this jungle terrain.

Satpura is home to several herbivores, both large and small. The largest herbivore is the Gaur or Indian bison, a huge brown bovine with its distinctive white socks and rapier sharp horns. Several species of deer and antelope including the Chital (Spotted Deer), Sambhar, Chausingha (four-horned antelope) and the highly endangered Black Buck, can be found here.

Satpura is home to several species of squirrel, including the Malabar Squirrel and the Flying Squirrel. It’s also a natural habitat for the rare Indian Flying Fox, which is actually a species of Bat with a gigantic wingspan.

Water birds in particular are drawn to the shores of the Tawa Lake. One often sees a variety of cormorants, egrets, herons and grebes in the park. Many of them are resident, but there are certain seasons when one sees some species in higher numbers.

Some of them, like the demoiselle cranes, are migratory and come for the winter, before flying back. One of the prettiest sights is the arrival of the ducks and geese that migrate here during the cold season. From Mallard Ducks to the Bar-headed Goose, their graceful movement across the water and vivid plumage lends itself to the landscape.

Canoe or boat safaris on the lake

Walking safaris with a naturalist

Buffer zone Safaris –While the regular game drives and elephant back safari rides take you into the core zones during the park season, buffer zone game drives can be experienced even in the off-season or when the park is closed. 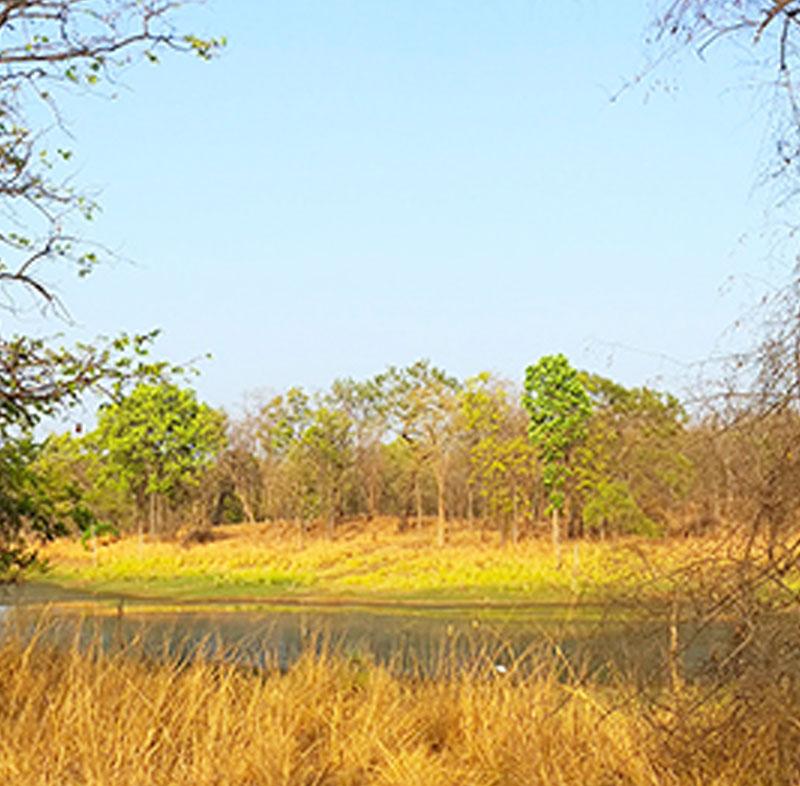 November to February are the best times to visit Satpura National Park.

The climate in Satpura is extreme. Winters can be especially cold thanks to the varying altitude as well as the fact that the park is land-locked. Early mornings and late nights can be extremely cold and frost is not uncommon in December and January. Come summer, and the temperatures go up, especially in the lower lying areas. However the areas that are at a higher altitude remain reasonably cool in comparison. The monsoon begins in July and can go on right up to the end of September or even into October.

Reni Pani: What we love…The “Gol Ghar” , or the central lounge area, has a quirky and eclectic charm, and includes a dining area, a cozy bar, a library and a space to just sit back and relax.

Forsyth Lodge: What we love…stunning vistas over the mountains and the surrounding landscape. At night, the sky is perfect for star-gazing.

There are high chances of seeing Sloth Bears and Leopards in Satpur, though tiger sightings are much more rare, as they are not accustomed to tourism. It is a new park on tourism map compared to it’s older cousins of Bandhavgarh and Kanha. This park finds a significant mention in “The Highlights of Central India” by James Forsyth. An area rarely visited is Churna, which is on the far side of the park from the regular gates. To stay in the forest rest house here is quite an experience, and this area is far better for Tigers compared to rest of the park.