Upon arrival at the international airport in New Delhi, you will be met by a Tigris Safaris representative after you clear customs. En route to your hotel, our representative will hand over your final documents and vouchers required throughout your itinerary.

Dinner and overnight at your hotel.

Arrival in Jabalpur at 12:00 PM. Your Tigris Safaris representative will be waiting for you on the platform to assist you with your luggage. You will be driven to Bandhavgarh in your Tigris Safaris chauffeur driven vehicle. Upon arrival at your lodge, check in and head straight to lunch. This afternoon, you will head out on a game drive into Bandhavgarh National Park.

Return to your lodge to enjoy the evening and have dinner. Overnight at your lodge in Bandhavgarh. 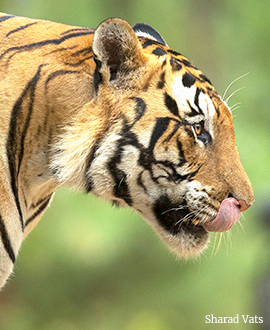 Wake up early this morning at around 05:00 hrs for your first foray into the forests of Bandhavgarh National Park. Bandhavgarh is one of the most beautiful parks in Central India and has deep historic roots. The park is named for the fortress that towers over the jungle. Enjoy an adventurous ride through the park and return to your lodge in the late morning. Enjoy a delightful lunch and some rest before heading out into the park again this afternoon.

Bandhavgarh is known for its incredible tiger density and it is unusual not to spot these felines among its thick Sal and Bamboo groves. The park is full of several other animals as well as birds and is a beautiful habitat.

Return to your lodge in the evening. Evening at your leisure and dinner at the lodge.

Early morning wake up call and game drive into the forest. Early mornings are a great time to observe birds and carnivores returning home after a night of hunting. Keep an eye out among the grasses to catch sight of a tiger taking a nap after a meal. Bandhavgarh is full of herbivores and reptiles and there is plenty of activity amid the jungle. Wild boars, sloth bears, porcupines, foxes, primates and several other animals scurry through the undergrowth.

Return to your lodge in time for lunch and a leisurely afternoon. Head out into the park again for your evening game drive. Return in time for dinner and relaxed evening.

Wake up early this morning for your game drive into the national park. Upon your return from the park, check out of your lodge and transfer in your Tigris Safaris chauffeur driven vehicle to Khajuraho.

Overnight at your hotel in Khajuraho and evening at your leisure. 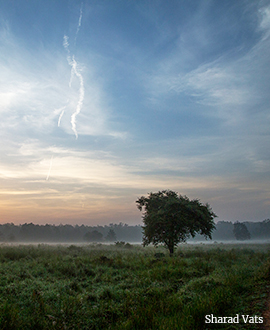 This morning, check out post breakfast. Stop once again to visit the southern and eastern group of temples in the Jain tradition. Continue to the airport to check in for your flight to Varanasi. Upon arrival in Varanasi, a Tigris Safaris representative will greet you after you clear baggage claim. Transfer to your hotel and check in.

Varanasi (also known as Benaras or Kashi) is the oldest living city in the world! It dates back to 2000 BC and is considered one of the holiest places of pilgrimage for Hindus. The city is situated on the banks of the River Ganges, and several temples, palaces, ashrams and havelis line its ghats along the riverbanks.

This evening your guide will meet you at your hotel to take you on a fascinating walk through the by-lanes of the old city and along its ghats. You will be moved by the intense spirituality that you will observe as pilgrims and ascetics come to pray and pay homage as they chant hymns and conduct religious rites and rituals to invoke blessings. Varanasi’s ghats are a seething morass of humanity and you will also observe several people conducting their lives right there in front of you. Whether it’s someone selling tea, or a barber or a wrestler practicing his skills, Varanasi is an open book on the intricacies of humanity.

Varanasi is specifically sacred for being a holy place where one practices the last rites of those who have passed away. Special rituals and traditions are carried out to ensure that those who have departed attain their salvation.

Return to your hotel and overnight in Varanasi.

This morning your guide will meet you early to take you for a boat ride along the Ganges at dawn. Tranquil and breathtaking, it is an intensely spiritual experience. Many pilgrims come to the ghats early in the morning to sing hymns in praise of the rising sun.

As you head back towards your hotel, don’t miss the gold spired of the Kashi Vishwanath Temple. You may also pause to visit Benaras Hindu University, which is one of the oldest educational institutions in the world, and has a beautiful collection of Indian art and the textiles for which Varanasi is so famous.

After lunch, you will be driven out to Sarnath, where you can visit the place where Buddha delivered his very first sermon. You can visit the Chowkandi and Dhamek stupas, the Tibetan and Mahabodhi Buddhist shrines, and the Sarnath Museum, as well as several ruins dating back to the 9th and 10th centuries.

Return to Varanasi and overnight at your hotel.

Morning at your leisure to unwind and pack. Transfer to the airport for your afternoon flight to New Delhi. Upon arrival in New Delhi, a Tigris Safaris representative will meet you at the airport to transfer you to the hotel.

Dinner and overnight at your hotel.

This morning, you will be met by your Tigris Safaris guide for a half day tour of Delhi’s highlights. Begin with a visit to the Red Fort that was built by the Mughal emperor, Shah Jehan, who was known for his deep love for architecture. Continue to the Jama Masjid, the largest mosque in India. Visit Raj Ghat, a memorial to Mahatma Gandhi, after which we will take a delightful stroll on foot through the bylanes of Chandni Chowk, the heart of historic Delhi. You may opt to have lunch at a local restaurant or return to your hotel.

After lunch, your Tigris Safaris chauffeur drive vehicle will take you by road to Jaipur. Evening arrival in Jaipur and overnight stay at your hotel.

Begin your tour of Jaipur with a visit to the massive ramparts of Amber Fort., from where the Kacchawa clan ruled until the 1700s. You may opt to take an elephant ride to the top of the fortress, where you will enter the fortifications and visit the Temple of Kali, the Hall of Victory and the Jagmandir temple.

After lunch, visit the highlights of the Pink City, including the Jantar Mantar observatory, the Hawa Mahal (Palace of the Winds) the City Palace and Museum, and the bustling bazaars in the historic part of town. Jaipur is known for its shopping from precious stones to handicrafts. Return to your hotel and evening at your leisure. Overnight at your hotel in Jaipur. 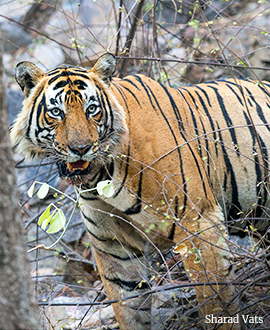 This morning, your Tigris Safaris chauffeur will drive you to Ranthambore. Check in at your safari lodge. Post lunch, head into the forest for an afternoon game drive through Ranthambore National Park. Return to your lodge in time for dinner and overnight in Ranthambore.

In the afternoon board flight to arrive Khajuraho at 1500hrs. Met at the Airport and drive to hotel, check in. In the evening proceed to see the Sound and Light Show at the 1000 year old Temples.

This morning, wake up early for your morning game drive through Ranthambore National Park. Ranthambore was the erstwhile hunting ground for the Maharajas of Jaipur, and is nestled among the Aravalli hills. The park is dotted with thick copses of trees and scrubby brush, as well as several ancient ruins. A magnificent fortress and temple lie at the highest point of the park.

This morning return to your lodge for a late breakfast. The afternoon is at your leisure until your afternoon game drive back into the park.

Ranthambore is known for its sizable tiger population, many of which hunt during both the day and the night. It is full of birds and several other species of animals.

Return to your lodge for dinner and evening at your leisure.

This morning, wake up early for your morning game drive through Ranthambore National Park. Ranthambore was the erstwhile hunting ground for the Maharajas of Jaipur, and is nestled among the Aravalli hills. The park is dotted with thick copses of trees and scrubby brush, as well as several ancient ruins. A magnificent fortress and temple lie at the highest point of the park.

This morning return to your lodge for a late breakfast. The afternoon is at your leisure until your afternoon game drive back into the park.

Ranthambore is known for its sizable tiger population, many of which hunt during both the day and the night. It is full of birds and several other species of animals.

Return to your lodge for dinner and evening at your leisure.

After an early morning game drive in the park, return for breakfast and then check out to embark on your journey by road to Agra in your Tigris Safaris chauffeur driven vehicle. If you like, stop en route to visit the magnificent palace complex at Fatehpur Sikri, which was constructed by the Mughal emperor Akbar, as his capital. You may also visit the tomb of the Sufi mystic, Sheikh Salim Chisti. Carry on to Agra and check in to your hotel. Overnight in Agra.

Return to your lodge in time for dinner and evening at your leisure.

This morning, visit the Taj Mahal, the magnificent monument which is considered to be one of the wonders of the world. Built in the mid-1700s, it was conceived by the Mughal emperor Shah Jehan as a monument of love for his wife Mumtaz. Over 20,000 labourers from various parts of the world pooled their skill to create this magnificent mausoleum that has been immortalized in white Makrana marble and embellished with onyx, amethyst, lapis lazuli, turquoise, jade, crystal and several other semi-precious stones that were brought from as far as Tibet, China and the Indian Ocean. (Note: The Taj Mahal is closed to the public on Fridays)

Later this afternoon, visit the Agra Fort. A marvel of architecture in red sandstone, its walls stand over twenty meters high with a huge moat surrounding it.

Later drive to New Delhi 230 kms/4 hrs drive. On arrival check into the hotel. Overnight stay at the hotel in New Delhi

Morning free for leisure activities and later Transfer with a Tigris Safaris representative to the international airport in time for you to check in for your flight and proceed onward on your journey.

Thank you for traveling with Tigris Safaris!